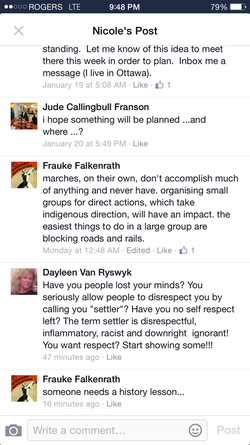 The term "settler" is constantly used to describe Canadians. It isn't a term of endearment, it is a derogatory term, used to make us seem inferior, to our native neighbors. I was born in Canada, I am NOT a settler! 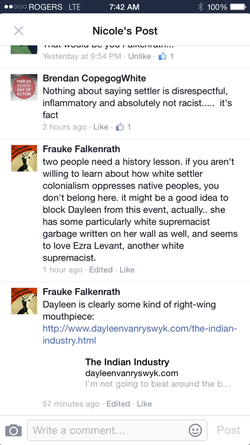 Another person posted about being called "settler' she didn't think it was "nation building" either. Apparently, her and I, need a lesson in history. He also wants me blocked from their group #ShutDownCanada, which is gathering Feb 13th,2015 to cause as much economic disturbance to Canada as possible. Domestic terrorism? It would be if any other group of people tried it.

As you can see, he thinks my page is racist and "white supremest" News articles, written by journalists in Canada are "white supremacist garbage" when grouped together on a web site. Really? 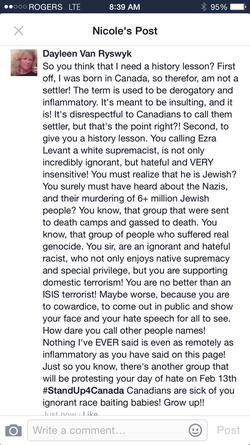 My response to Mr. Falkenrath (if that's your real name) apparently, he thinks calling a Jewish man a "white supremacist" is okay, correct, appropriate??? Really? Beyond shameful! 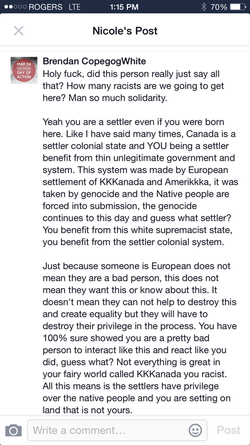 So, here's a pretty interesting rant. Apparently Brendan didn't like my post (above) and he felt a need to respond. I'm glad he did, because it shows, pretty plainly, the dialogue we see on a daily basis. He seems pretty wound up, and as we see everyday. He (they) really likes the KKK reference. 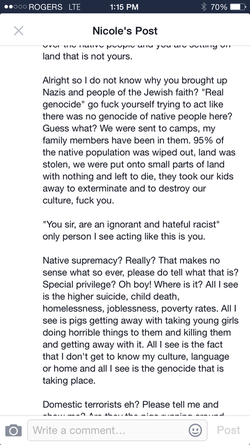 He doesn't understand the Nazi and Jewish comment. Well, if he read my post that he's ranting about, then he'd see that his comrade in arms, created the antisemitic and supremacist issue, I just commented on it. He's too busy on his hate march, that he didn't read what I said..apparently. 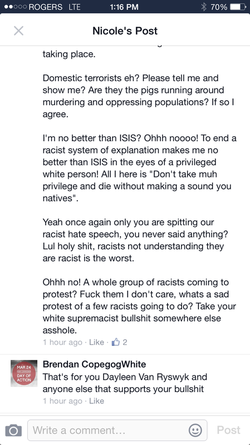